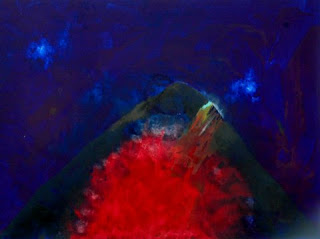 Just finished reading 'Wanting enlightenment is a big mistake', the teachings of Zen Master Seung Sahn. The book brought back memories of my years of teaching at Bournemouth Art College where we were into all that mind emptying stuff. We were dubbed the Zen School of Photography; not a title we gave ourselves, I should add, but given by other colleges to label us as nuts I guess; not serious, don't go there. Of course it had the opposite effect and we were overwhelmed by applicants every year and made it policy to interview every one of them. Took ages.
So, mind stuff. Seung Sahn talked about the six doors through which we engage the sensory world of experience, the eyes, ears, nose, tongue, body and mind. And this I did with students on my classes, gradually weaning them away from ideas and projects and taking them into journeys within themselves and thus to the very source of their own creativity which in turn drew from the life spring of the universal creative collective, or whatever one wished to call that stuff which just arrives by magic when the mind is still.
One of the last interviews John Lennon gave illustrates this primal point. He was asked where does your genius come from and he replied 'Don't you guys ever listen? I keep on telling you it doesn't come from me, it comes to me. I just wake up in the night and there are words and music in my head and I have to crawl to the piano and play the sounds and write the words down'.
Nice that.

Michael at STARSTONE
Posted by Michael Eldridge at 8:45 AM