Those days back then

Yesterday we went to a festa of local artisans at the Fattoria San Liberato nearby. Now, I'm not exactly a Luddite by nature as I love the beauty of a lot of modern design, but I was deeply moved by the quality and sensibility of the old ways and crafts presented at the festa by a host of quite lovely folks; weavers, shoemakers, bag makers, hatmakers, watchmakers and many more. I got into conversation with many a kind person and was struck by their intensity of purpose and the presence they exhibited in particular the deep levels of concentration they portrayed.
Here's but one example which warmed my heart. 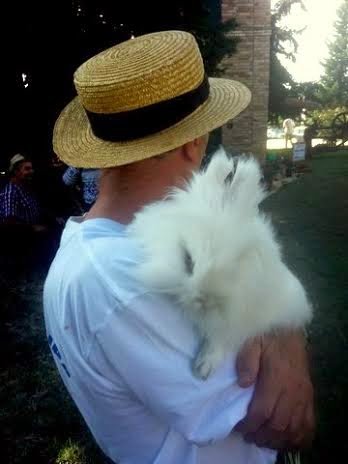 This is Mila (and her owner Stefano.) Mila is an angora rabbit and Stefano told me stories of how he used to go up to Treviso in the 50's with his father to fetch Angora rabbits. They would keep them and cut their fur with scissors and sell it to local weavers. This trade has long since died out but he has this one rabbit whose name is Mila. He has tried breeding them but they are so delicate that those he gives to people as pets seldom live long as folks do not realise how special they are and how much attention they need. He takes Mila with him everywhere and she sits beside him on the passenger seat of his car with a special seat belt. She is shy of strangers and buries her head under his elbow when feeling timid and sucks his thumb for comfort.

This is Camilla. She is a weaver but does less weaving nowadays as her fingers have gotten stiff.
Here she is weaving angora fur which she makes the occasional jumper with. She visits schools and talks to children about the times past and she says that they are always completely enchanted. And she tells them all about life the old days and questions them and allows all their questions too.
This made me laugh.. One of the questions she asked recently at a school was 'Where does yogurt come from?' And a little girl answered 'From the fridge' And then she went on to show them how to make it. 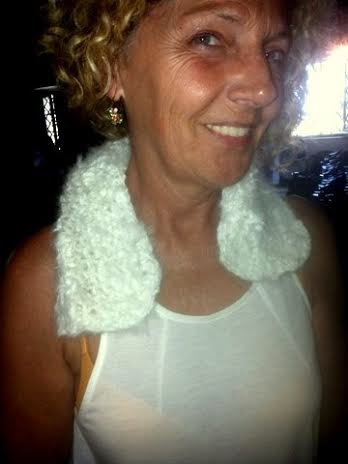 This is an angora fur neck warmer modelled by Liliana 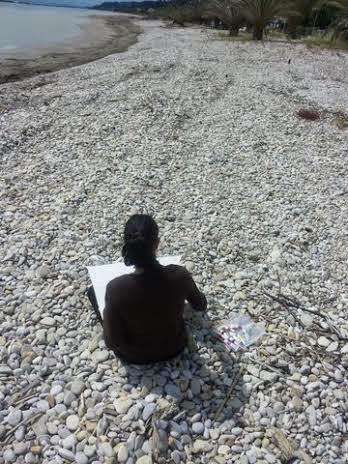 Back to now. I love this photo, I think because it symbolises creativity as a singular pursuit;
a private voyage with the soul merging with nature. And there is no separateness. There is just timeless time, concentration which dissolves into pure presence. It is the same parallel existence which runs beside us like a daemon who cares for us. It is the same gift which we contain within us still, and which existed abundantly in those old days. But it only re-emerges in present times when we choose to prise ourselves loose from this modern world which herds us into ever diminishing corridors of constraint.

Posted by Michael Eldridge at 9:13 AM No comments: