The Biennale, Daimans and Light

After our workshop in Assisi, Jack Fulton and I headed up North to the Veneto to see the Biennale in Venice. This year it was without a common theme although it had the title of  'Viva Arte Viva', which sort of translates as 'Long live Living Art'. On reflection, I would say it was about human values, not much brain scything meaningless conceptual stuff, except of course from Damien Hurst. A touch of shamanism and humour too, although the funniest part was the entrance itself with scores of bewildered tourists asking each other how the electronic ticket counters functioned (imagine Waterloo station arrivals board on a very bad day)
I've been going to Biennales for more years than I can remember and I have found that it is very rarely that the international works in the Giardini and the Arsenale have done anything but interest me; nothing breathtaking. The shows by individual artists around the City score more powerfully. Must say though, that I always come away feeling jiggled about a bit, woken up.
Trodden upon by tourists though,
And those Cruise ships!! Packed with thousands of people 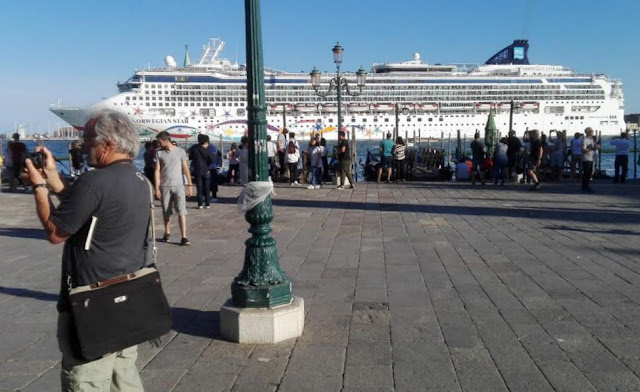 The very top deck ( I think the thirteenth) is lined with tourists taking photos of us taking photos of them. Ghastly.
But what can you do?
Something.
What I do is run photography workshops there in early December and early February, as a sort of antidote to mindless tourism. There are few people around and this beautiful City reveals itself to those who have the time at last to pause and look and wonder at its dark secrets and hidden mysteries.

OTHER WORKSHOPS THIS YEAR with STARSTONE

The Art of Wilding, (Photography and Awareness) July 15 and 16, Brighton UK
The Tango of Creativity Sept in Assisi


Posted by Michael Eldridge at 1:24 AM No comments: