The man on the bridge

It was on a humpback bridge and he was struggling up as we were passing him on a fresh early morning in Algarrobo. He was pushing an old bike stretched over which were two huge conga eels which he told us he'd caught that night. We helped him push his bike up to the top of the bridge and he went on his way, hobbling along on his wobbly legs and angled feet.
As we walked away, my daughter told me that he is an artist and that a few days before that he had fallen on the bridge and that she had helped him to his feet and that he had asked her not to mention the incident to his mother that he had taken a spill, that she was against him going out onto the street because of his unsteadiness and that she was tired of always having to fetch him when folks called her out to take him home.
And so,over the days I spent there, my daughter told me more about him and we would pass him every now and then and always found him full of stories and happy to share our company if only for a brief while.
I learned that his name is Jave and that he had lived in Algarropo all of his life and that he was also a fisherman, one who supported his art by selling the fish he caught. He would fish at night and sell his catch to buy art materials.
I learned too that he suffers from Parkinson's disease and I was humbled by the courage of this brave man who did not simple just sink into his illness; just give up, but that he pushed himself almost to the limit of endurance to keep his creativity alive.
His output was prodigious and the images and sculptures he makes are of his fascinations for the sea;in painting and sculpture, drawing his living and his art from this same source. My daughter and I took a walk along the seafront on the last evening of my stay and passed his studio where we found him making art objects from pieces of cable he'd found on the beach that day. And one of these he gave to her as a gift for her kindness to him

This is a tale of courage, but it is also about the a state of creativity,
'That wonderful state which makes art inevitable', to quote Robert Henri.
It is a story of a unique human being and it is a sharp reminder of life's truer values, a sort of wake up tonic-thought, ideal to kickstart the day, I would say,

To seize the day. 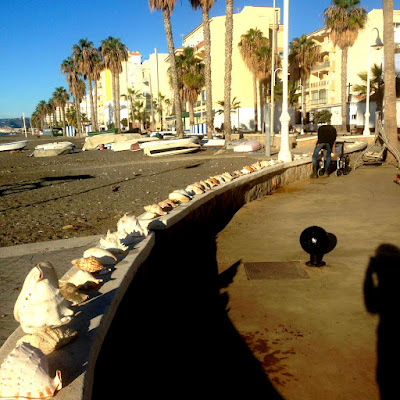 Jave and his concha shells 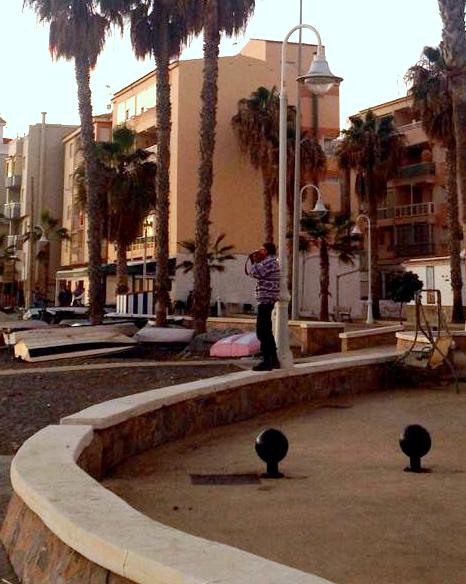 Jave and his musical shell

She told me that on News Years Day at sun rise he laid out his collection of conch shells on the wall, from the smallest to the largest and as he did so he polished them, at lunch time he took them down again and that evening as the sun went down he blew a huge conch shell and the noise floated across the ocean...She wasn't quite sure what that ritual was but it was beautiful.

For Jave, life is continuous action, despite his health issues. He is creating beyond himself.
I found it to be a humbling experience to have met him and to witness his incredible output and energy

Look out for our creativity workshops in Italy this summer; photography and painting