A message to my friends 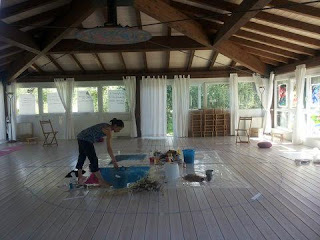 Dear friends,
Firstly, please forgive me if I have already bombarded you with messages from Facebook, Linkedin, Twitter, Instagram, forums, all that stuff that I grope around in; that dark forest of my aimless wanderings and treacle swamps.
This is just to remind you of the workshop which Michelle Rumney and I are hosting in Assisi May 26 to 30. It's about re-awakening creativity.
Stop! I know some of you are thinking 'I haven't got a creative bone in my body', or some such nonsense you were lead to believe in childhood.

Truth is, every adult retains within them this wonderful instinct which humans have to create beyond themselves
And what we do in our workshops is quite simply (and as if by magic) turn the key of that old solid creaky oak door and let you back in to the creative garden which has been waiting patiently for your return.
And as if this were not enough in itself, There is Assisi, just 8k down the road; that wonder shining like a diamond perched on the mountains of St Francis. And then there is Casa Faustina itself, with it's wonderful environment and simply delicious Italian vegetarian food.
More on our website www.starstone.org
And email Michael at michael@starstone.org
Much love to you all,
Posted by Michael Eldridge at 1:56 AM No comments:

Birds, life and death and Prince

This morning the first cuckoo. And I feel excited as I always do when I hear that sound.
Life affirming and real. But ten minutes later.....Aia!.......Minu, our youngest cat, drops a bird at my feet. It's a gift of course so there is no point in getting angry, she wouldn't understand. This little bird is still alive and I nestle her in my hands for warmth and take her to my studio and wrap her in an old T shirt to keep her temperature constant. And leave her there to recover. And sure enough she does and I find her 30 mins later fluttering at the window and as I go to gently catch her and liberate her, ...... Zak! Minu's mother leaps past me and catches her in her mouth. She had somehow secreted herself into my studio and had been waiting for her moment to strike. This time, though, I am angry and shout at her and she drops the bird. So then again I wrap it up again in my T shirt and place her on a table to recover.
Fast forward three hours. We are back from lunch and I head straightaway to my studio but she isn't anywhere to be seen. So what can I do, I make sure no cats have got back in and close the door to check again in an hour...Which is right now!
Phew! You can put your kleenex away because she is alive and perched on one of my paintings, which may be a good omen for us both. And I've just checked on Google and will do as instructed and release her in the morning because it is currently raining and the sky is darkening. Just keep her warm and give her time to recover, that's what I have to do
So, there you are, two bird stories to start your day.
Update tomorrow after breakfast.

Next morning... Poor little bird died over night.
Cats are domestic sharks and now I am angry with them, although it serves no purpose to be so.
Worse still, I then find her mate dead outside our front door. They were Orphean Warblers, the first we have seen in our garden. They spent the days swooping and diving after each other, no doubt creating a nest in the trees nearby.
Such a wanton waste and a desecration of beauty and sheer goodness. An untimely and unnecessary loss of life

Lenny Henry writes this about Prince in this morning's Guardian
'Prince was about high stakes, love, hate, life and death - he was into extremes. In the song Sometimes it snows in April, from the Album 'Parade', he said
'Sometimes I wish life was never ending, but all good things, they say, never last'
He was the ultimate in good things. His creative legacy will last'
I've read, too, that in this last year Prince was working with incredible intensity, almost as if he was trying to beat the clock. One interviewer asked him what he felt about getting older and he said something like 'It's great as I am getting close to the source, my maker'
And when Guardian reporter visited him last year, he described spending the previous night just playing to himself for three hours without pause.
“I just couldn’t stop. That’s what you want. Transcendence. When that happens … Oh, boy.”

And they say the music was flowing out of him in an unstoppable torrent,

Ah, such mixed thoughts this rainy morning. But the sky is clearing from the North and I will go and buy some flowers and bushes at a festival of flowers by the sea in Civitanova. And plant them in our garden

Michael and Michelle Rumney are running a workshop 'Time and Space to be Creative' in Assisi, Italy May 26 weekend.
Contact Michael for information

The tree and the sea

The tree and the sea.
I am often asked why, if my passion is for painting, did I choose to teach photography. It's a good question and the simple answer is that it was more fun. Photographers are gregarious, share stuff, move more quickly and have a wider spectrum of activity and are not so scared of messing up.
Another reason was that I wanted to instill in photography students the slower and often deeper instincts of a painter.
Sounds somewhat elite this doesn't it?
But that is not the case at all.
Let me explain by giving a simple example from this past week of how this is still relevant in my life, a life which has me floating in the space between these two expressive forms of creativity, respecting both for their differences and power to affect our lives in incredible ways.
The Tree 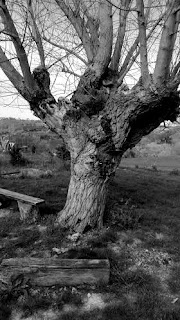 This I pass half a dozen times a day walking to my garden studio. I posted a photo of it to our Facebook page 'Mindful Photography'
I added an explanation, describing it as a City, probably three times my age, which is the home of a colony of 10,000 ants, spiders, beetles and a myriad of micro creatures as well as black squirrels occasionally, and of course birds; a living organism in itself and a host to other living creatures.
Not an unusual thing to do you might say, but for me this is so. Unusual because I have always taught that a photograph must, if it is meaningful photograph, say all of these things by the singular power of its image alone.
So I would impress on students that making a photo is easy, but to fully absorb oneself in the subject of interest, absolutely so, this is what one must do, even before even thinking about picking up a camera.
The Sea
And this below is a painting I made at the same time. 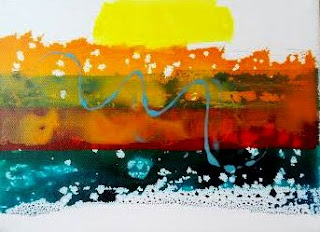 I live by the Adriatic sea in Italy and this is one of a series of the influences this area is having on me, feelings and thoughts and mindsnaps which are bouncing into me, of the wind, the colours of the sea and the adjacent land, the boats and the stark boatyards, the smells even of the fishing boats and the continuous movement of birds and people around its shores.
But can you see how different these processes are?
There were times in which I forbade students from taking more than one photo a month; all the time slowing them down, becoming what we now refer to as mindful (although I prefer mind empty, except it sounds a bit odd)
So, there you are. Memories which surface from time to time which serve as teachers.
Historically of course, I am referring to a time at Bournemouth Art College in the 80s and 90s (when it was nicknamed the Zen School of Photography); a time when there was time, and with only a small number of students too. But to me, these principles of course still apply; that any form of creative expression must involve complete absorption into the arena in which we choose to express ourselves.
And you get there by going there.

Michael Eldridge and Naga Dipa are running a workshop in Brighton in July entitled 'Mindful Photography' for details write to michael@starstone.org

And Michelle Rumney and Michael are running a workshop in Italy in May entitled 'Time and Space to be Creative' Click here for more info or write to michael@starstone.org

Posted by Michael Eldridge at 7:35 AM 2 comments: