A garret in Paris?

You see, you are not educated to be alone. Do you ever go out for a walk by yourself? It is very important to go out alone, to sit under a tree—not with a book, not with a companion, but by yourself—and observe the falling of a leaf, hear the lapping of the water, the fishermen’s song, watch the flight of a bird, and of your own thoughts as they chase each other across the space of your mind. If you are able to be alone and watch these things, then you will discover extraordinary riches which no government can tax, no human agency can corrupt, and which can never be destroyed.

I really like the above quote from Krishnamurti. It fits in with my the notion of re-wilding the self which Naga Dipa opened my eyes/mind to on our workshop in Sussex last July; this being that just how many good people are at last waking up to the truth that Nature can no longer be violated, but instead saved from our ravaging, so we must equally take a journey inwards in an attempt to heal and address and acknowledge the inner ravaging of our minds.
And that nature can help to heal us as we begin to heal her. A double deal.
And art, creativity in whatever form, is a vehicle which reminds us of our humanity and thus helps in this healing process.
And it is this inter flow that play with in our workshops. 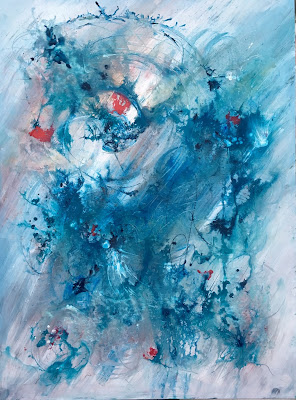 And the above painting by Jamna Owen speaks to me of that life force which bubbles in all our hearts when we see even the smallest of nature's wonders when walking along with or senses alive to the world outside of us (instead of being glued to a smart phone)
Jamna is trained, and works in, the field of marketing. Rational and quick thinking, she has, however, over the last few years re-awakened her right brain simply by the act of painting.
And indeed, what we attempt to achieve in our workshops is a balance between both hemispheres of the brain, so they learn to work as one, in a sort of agreed symbiosis, a trade off if you will . And this we call our mind.


No reason to starve in a garret in Paris any more
Posted by Michael Eldridge at 6:01 AM No comments:

I love this photo. It's of a group of folks walking across the mouth of the extinct volcano of Monte Vettore in the Sibillini National Park 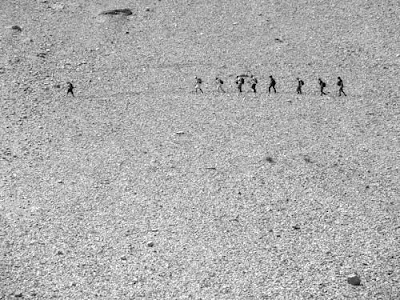 And within the bowl of the mouth itself there are two small lakes, known as Pilates lake, which join together when there is sufficient rain or snow and where live little red shrimps; there since primordial times, thrown up by an ancient sea and who decided to stay. Nice idea. 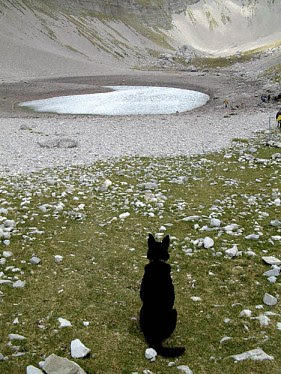 My dog Bessie looking at the shrimps at Lago di Pilato

We can see Monte Vettore from the agriturismo at Cittadella where next year we are basing our workshops in photography, painting, sketching and poetry, come rain or shine, under the title of 'Re-wilding the Self''
Please explain..
OK, this title derives comes from a workshop Naga Dipa and I ran last month in Sussex. It was held in an ancient forest near Lewes; photography in essence but I think we all came under some sort of magic spell where the outer world around us, full of ancient oaks, lime and beech trees, sort of absorbed us in their timelessness and it became both and outer and an inner voyage.
Rewilding as a concept I'm sure you are aware of. It is where we humans restock nature with her original creatures, thus to rebalance the damage we have done. You've probably read recently of an example of a parkland in Northumberland where they are reintroducing the Lynx (brought from Eastern Europe) which was hunted to extinction some 500 year ago in Britain. The idea being that as its only prey is deer, that these animals will keep the deer population down and thus the forests will bloom with undergrowth again and small animals and insects will return, thus birds and beavers too they say.
And so it is with the Sibillini National Park, where Rangers have already reintroduced wolves and bears. (Yes, and you can imagine waking up at night on one of these workshops to find a bear staring at you through the window. And a wolf). How exciting
So, re-wilding the self is where we absorb ourselves in nature in this beautiful wild terrain but also venture into our inner nature too, realising what it is to be truly human and in no way separate from Nature. And we do this through the medium nature has given us, our creativity; by painting, photographing, sketching, poetry. An inner and an outer journey.

Posted by Michael Eldridge at 8:07 AM No comments: