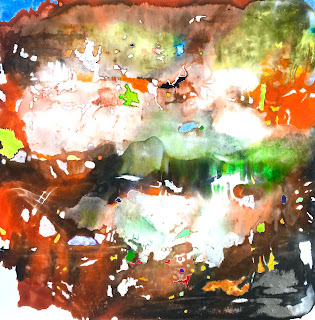 This is a recent painting of mine.

It is untitled as all of them are.

This I do because it allows folk to make their own personal voyage.

And the story of such an adventure interests me greatly.

My work gets put up on social media and gets a multitude of likes.

Which to me is a warming flash of emptiness.

Example; from a poet friend of mine in England.

'This really speaks to me'

So, I asked her if she would write a poem about what my painting said to her.

She has in fact written three, and here are two

Weave a curtain of the elements

I settle on the glowing light

Sink down through the

By the process of immersion

I inhabit the image

I taste the vibrance

I am warmed by the light

My words will flow.

Interesting that she has named it, and that is OK because it is her voyage now.

And I can go on about how those who have bought my paintings tell me that they change over time and reveal stories which have been hidden in some magical way.

I've decided to add this collaborative word/image game to my September workshop in Italy. It's fun and enlightening too.

Posted by Michael Eldridge at 1:36 AM No comments: