I've just been talking to an Archangel 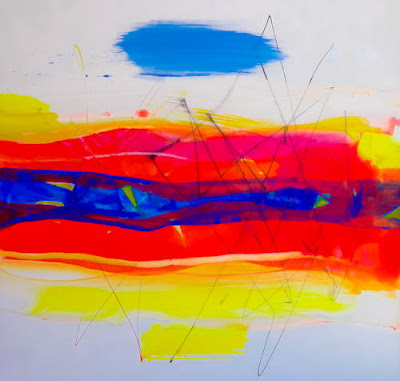 This may sounds little odd, but oft times I paint blind, or maybe I mean dumb, or maybe I don't mean either. This painting, which I finished last week before going to Cornwall, bowled me sideways when I looked at it this afternoon, back home in my studio. Like most of my stuff, it had just arrived on some creative wind from who knows where. But I'd painted it before I had even arrived there.
The story.
I was at St Michael's Mount, visiting a friend who runs the place, although truer to say it runs him, and was buffeted about by the wind, dazzled by the intense glare of sunlight on water and utterly at the mercy of the elements.
And those elements. Friend tells me those who are obliged to live and work on the island, last usually for no more than two years, then crack. Those who make it to three, simply suddenly adjust and are sort of absorbed into the elements and stay. You see, life there is completely subject to the tide and wind, and what we normlings call daily life, is just not possible there.
I sort of like that, because in a magical way, creativity itself is like this. It comes from somewhere which is bigger than us, greater than us, and we catch it on the wind, sometimes in a crashing roar.


It is humbling and it makes nonsense of both rationality and time itself. As I imagine would an Archangel.

Michael
Posted by Michael Eldridge at 12:23 PM No comments: