Watch out for Jellyfish


In moral support of Lewis Pugh, I returned to my morning swim in the sea regime this morning, after a sojourn in London. He says that courage is a muscle that improves in strength when practised.
And he's dead right about that. This morning in particular.
I was late arriving at my swimming beach because my mind was making excuses, the excuse of a burned foot (small accident with flaming plastic bag before London trip) and my mind said, take it easy, stay in bed, go tomorrow. Then I remembered that it's Lewis's last stretch of coastline morning. So I took his wise words as a spur to action and drove down to the sea. And what a difference an hour makes of a morning. Four times as many cars, ten times as many people, and, sad to say, Georgio, my seagull friend had given up on me and wasn't on his perch out at sea.
But I swam out to him anyway in his absence and sang his song to him, thinking he might hear me and fly to his black post, but alas not. He's sulking I guess.
The water is crystal clear, the air morning clean and fresh and I realise how lucky we are here in Le Marche, between the sea and the mountains. Read yesterday that 95% of city people in Europe breathe polluted air and that this effects the brain's function, that children are affected most of all. Great!

Which takes us down to Sicily.
Do you know Sicily?
You do?
You don't!
It is a place like no other
Folks there are intensely protective of the environment, the land, the surrounding sea, air quality, water quality, flora and fauna, and they are pro-active about these issues. And once they have fixed their awful roads and all drive electric cars, I think I will be singing their praises endlessly.

You might like to know that Gianni Girotto and I are running our BreathingArt workshop down there in October.
It's at the spectacular Bannata Centre
Here is an info link

So,here's a toast to Lewis Pugh, who at this very moment is finishing his super human swim and meeting Michael Gove at Dover.
Watch out for jellyfish Lewis.

Michael at
Starstone
Posted by Michael Eldridge at 8:58 AM 2 comments:

So, we all know how to eat well.

How we should limit our alcohol intake.
How to keep sun exposure in check.
How much we should exercise.
How to be conscious of our carbon footprints.
How much water we should drink each day.

BUT..
Do we know how to breathe properly?
Gianni Girotto.. has taught right breathing in Italy for many years and this October in Sicily he is collaborating with artist Michael Eldridge in an experiental workshop which explores the relationship between right breathing and the creative impulse.
What does this mean?
Gianni has found that the very practice of correct breathing triggers off a profound and powerful
release of energy and clarity of mind; this followed by a desire to do and make and to create in some form or fashion.
Michael has followed Gianni for years now and he has jumped at the prospect of working with him in Sicily. On this workshop he will show folks how to galvinise this energy and how such alchemy
can produce art work in the form of painting.

You don't have to be a a painter to come on the course, nor do you have to have had previous knowledge of right breathing techniques.
You just need to be curious, adventurous and to delight in the prospect of working with like minded people at the remarkable Centre of Bannata in central Sicily


The workshop is in both Italian and English

Posted by Michael Eldridge at 4:39 AM No comments: 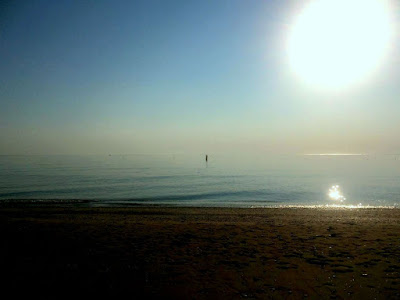 This is my friend George.

He is a seagull
And the photo above is a portrait of him.
Perched on top of the black post

Every morning at daybreak I swim out to him and sing him a song
Why, it could be 'I'm not in love' by 10cc.
Or, 'True love will find you in the end' by Daniel Johnson
Maybe 'Wild Thing' by the Troggs
Always love songs

You see, I play this game. 'My last day on earth'
I guess it's just a mind game like any other, but I like it because it intensifies every day.

What I do is experiment with my mind, to see what it's up to.

You see, it gets in the way all of the time, so I figure if I pretend that this is my last day on earth, then I'm gonna miss so much of just plain ordinary stuff.
Like waking to watch the sun rise.
Like driving to the sea on traffic free roads
Like whispering HI to cats and dogs I pass.
Especially the two Cocker Spaniels at Civitanova Alta
Doing Tai Chi on an empty beach.
And singing to George as I swim towards the black post

A note; this wonder of living in the day for the day, is what we practice on our workshops, because you see, that is where creativity finds us, because we go looking for her in the mountains, by the rivers and lakes of the magnificent Sibillini mountains.


Posted by Michael Eldridge at 7:10 AM No comments: